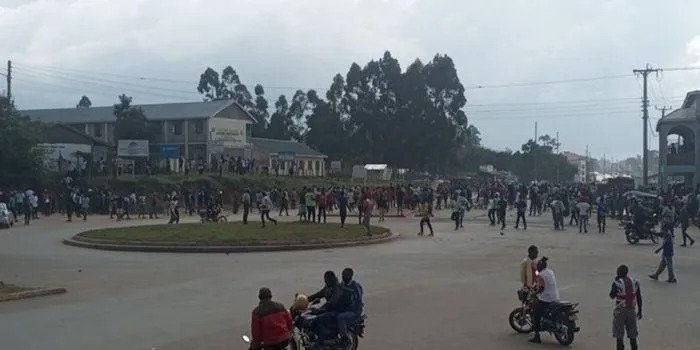 Share this article
Two students have been arrested following the incident.

Two Masinde Muliro University of Science and Technology (MMUST) students have been arrested following the death of their colleagues after a fight that resulted from an alleged love triangle.

The body of the student was found dumped in the Mahiakalo residential estate on Friday night. Preliminary investigations revealed that he was hit on the head by a blunt object, and police believe that was as a result of an altercation over a woman on Friday.

Kakamega County Police Commander Joseph Kigen said the two suspects were last seen with the deceased before he was found murdered.

“We have the male and female students in custody and our preliminary investigations indicate that their colleague was murdered following a disagreement over the woman,” said Mr. Kigen, adding that one of the suspects sustained injuries after the fight.

Masinde Muliro University students earlier today took to the streets to demonstrate against the murder of the student.

“We are still investigating the murder of the student in Mahiakalo. It appears, he was attacked as he headed home at night,” Mr. Joseph Kigen added.

Residents are decrying rampant insecurity in the area and calling on police agencies to intervene.

“We are shocked by the killing of the young man. It appears he could have been murdered elsewhere and his body dumped here,”  one resident claimed.

The body of the student was taken to the Kakamega County mortuary pending postmortem.